Olive Branch High School exists to provide students with the opportunity to nurture beliefs, to develop personal honor and to provide the tools with which all can be successful. 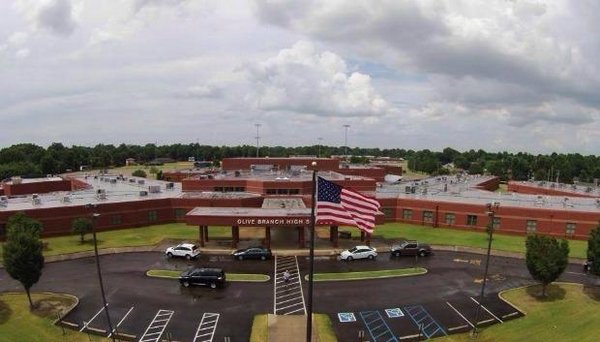 Directions to the School:

Olive Branch High School is a Mississippi Tech Prep School and a part of the DeSoto County School System. It has a student body of over 1200 and a faculty and staff of approximately 100. The principal is Mr. Jacob Stripling.  He is assisted by Mr. Todd Nichols, Mr. Sid McNeil and Mrs. Dana Kendrick.  The Superintendent of Education for the DeSoto County Schools is Mr. Corey Uselton.

The school moved into the present facility in January of 1996. This building was part of a $35 million building initiative taken on by the county schools that provided one new high school, three middle schools, and renovations to several other schools in the county, including Olive Branch Intermediate and Olive Branch Middle.   To keep pace with the growth in the county, eight new classrooms were added to the facility in 1999.  During the spring and summer of 2001, 8 additional rooms, along with an additional building containing 3 technology labs, an art lab, and 6 classrooms were added to the school.  The middle school has added an additional 17 rooms, a band hall and renovated the existing building.  This project was completed for the 2000 - 2001 school year.   Olive Branch is currently one of the the fastest growing communities in the state of Mississippi, as well as the nation.  Since 1990, Olive Branch has grown from a small town of 3,000 to a large community of over 32,000.  A bond issued was passed in 2004 to 10 new schools were finished in 2006. In 2012 a performing arts center is scheduled to be added to the campus.

Olive Branch offers the student body many challenges. There are numerous clubs and organizations that are available to the students. From the Art Club to the Spanish Club, with Interact and FCA in between, the students contribute to the community in which they live.  Interact has awarded several Make A Wish presentations.  Several groups provide the students with the chance to travel abroad.

Multiple extra curricular activities and sports provide Olive Branch High School students with a wide range of activities in which they can participate. Boys' sports are:  football, baseball, track, basketball, tennis, golf, power lifting, and soccer.  Girls sports include:  bowling, swimming, fast pitch softball, tennis, golf, soccer, volleyball, track and basketball.   The boys' varsity basketball team,  boys' varsity golf team and the girls' volleyball team have won Class 5A state titles.  The varsity football team has regularly competed in the North Half playoff games.  In 2011 the football team won the 6A state championship.   In addition to these athletic teams, the cheerleading and dance teams regularly compete successfully in regional and national competitions.  Olive Branch also has an award winning vocal and instrumental tradition. Both the band and choirs consistently receive superior ratings at the state level and many other regional competitions.

When the school moved into its new home, it also moved into a new football stadium, named for legendary Coach Leslie Pool. It was a very sad night when the Quistors played the last game in "The Hollow" as the field at the old school was named. One tradition ended and a new one started on "The Hill" as then play-by-play announcer  Mr. Jimmy Woods, called the new stadium. The facility, which includes an astroturf field, rivals any in the state.  Due to the rapid growth of Olive Branch and the school, the Conquistadors now compete in Class 6A, challenging state powerhouses Starkville, Columbus, and South Panola.