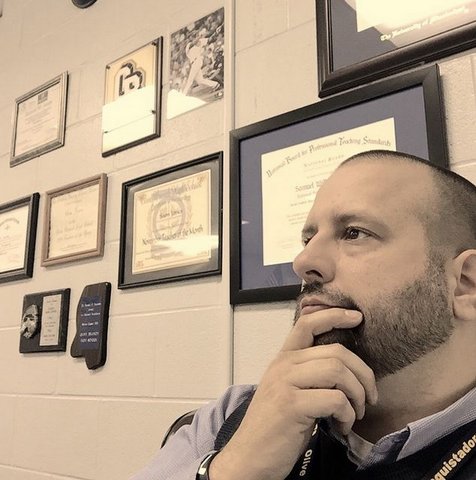 My name is Sam Jones and I am absolutely and positively excited to be  your child's U.S., World, and/or AP World History teacher for the 2019-2020 school year!

Olive Branch High School prepares to celebrate its 107th year of existence in serving the students of eastern DeSoto County!  I am also excited to introduce the F.I.S.H. program in my history classes.  F.I.S.H. is the name of a new literacy and parental involvement initiative I have begun this school year, culminating in newer, more challenging Real Life Connection (RLCs) analysis and discussion, literacy conferences, a video blog, and a brand new Twitter account in which students and parents can exchange information.

Mike Schmoker, author of the ground-breaking book Focus: Elevating the Essentials to Radically Improve Student Learning, states that social studies, if taught right, should be the most fascinating of all the subjects taught in school.  I have accepted Mr. Schmoker's challenge and making social studies fun, interesting, and relevant to daily life is exactly what F.I.S.H. is all about.

I am looking so forward to working with you and your child this school year.  If you have any concerns, anything at all, please do not hesitate for a moment to contact me.

Thank you very much!

Tweets by historyfishpro
About the Teacher

Mr. Jones has been happily married to his wife, Rosemary Jones, since November 2000.   Mrs. Jones currently teaches community-based life skills at OBHS.   They have two children : Patrick (age 16) is a junior at Olive Branch High School, and Lydia (age 12) is a 7th grader at Olive Branch Middle School.  Mr. Jones and his family are members of Maples Memorial United Methodist Church in Olive Branch.  He is a certified candidate for ministry and has been an active member of the Mississippi Annual Conference of the United Methodist Church.  Since June 2019, Mr. Jones serves part time as an associate pastor at Maples while attending seminary.

·       Tell your family members you love them every single day.

·       Always get up when you first awake, no matter what time it is. One hour in the morning is worth two at night!

·       In times of danger or trouble, first think—then act coolly and decisively.

·       Persevere—never give up a thing until you have tried it every possible way. Perseverance is the best school for every manly virtue.

·       Never be prejudiced nor allow yourself to be led by others.

·       In studying, concentrate your thoughts solely upon the subject before you. 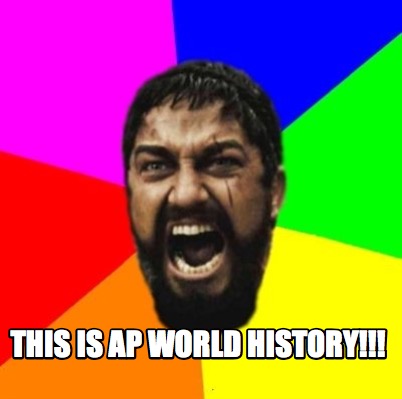 Program:   AP World History is offered to sophomores, juniors, and seniors.   It is anticipated that the majority of students will be sophomores.   Students are enrolled in the course on the basis of teacher recommendations and GPA.   Students enrolled in this course are expected to take the AP examination.

Course Information:   AP World History is an academic semester course that meets daily for 90 minutes.   In this course, we will trace the development of world history from the emergence of cities to the present – focusing on the period after 600 C.E. – and emphasizes the analytical and writing skills necessary for success in a college-level history course.   To this end, the course devotes considerable time to the critical evaluation of primary and secondary sources, analysis of historiography, oral presentations, short essays, the development of essays appropriate to: 1.) document-based questions (DBQs) that will be posted on the course website, 2.) long essay questions (LEQ) and 3.) short answer questions (SAQs).   Students are encouraged to join the instructor in the use of a variety of technology in the classroom.

This course emphasizes student-centered learning.   The vast majority of daily lessons are divided into two segments – lecture and workshops. Lectures are carefully prepared to present outside information or to clarify particularly difficult aspects of the subject matter. On average, lectures occupy 35 – 50 minutes of each class period. The topics of the workshops are also varied.   Methods include role plays, mock trials, debates, seminar discussions, writing labs, cartographic activities, group research, and individual research.

Course Themes
In this class, we will examine. . .

1.       Interaction Between Humans and the Environment: Demography and disease, Migration, Patterns of settlement, Technology

2.       Development and Interaction of Cultures: Religions, Belief systems, philosophies, and ideologies, Science and technology, The arts and architecture

• Key Concept 1.1. Big Geography and the Peopling of the Earth

• Key Concept 1.3. The Development and Interactions of Early Agricultural,

archaeological sites in the Czech Republic, the Ukraine, and Russia. Archaeologists date them

social systems, on environmental and technological changes, and on the development of

Organization and Reorganization of Human Societies : 600 BCE to 600 CE will last approximately 3 weeks.

• Key Concept 2.1. The Development and Codification of Religious and Cultural Traditions

• Key Concept 2.2. The Development of States and Empires

• Key Concept 2.3. Emergence of Transregional Networks of Communication and

achievements of Greek, Roman, Persian, and South Asian societies and the ways they have

endured in design through today. We will spend about one week examining the emergence

the spread of those belief systems had on social structures and gender roles. Sample

systems and the spread of crops, expansion of pastoral nomadic groups in Central Asia), and

map exercises on ancient conceptions of the world. These lessons address Themes 1, 2, 3, 4,

• Key Concept 3.1: Expansion and Intensification of Communication and Exchange

• Key Concept 3.2: Continuity and Innovation in State Forms and Their Interactions

Islam and the Islamic Empires, create annotated diagrams of the dynastic cycle of the Tang

and Song dynasties, compare the development of polities in Mesoamerica and in the Andes,

and present on Genghis Khan, Viking and Polynesian migrations, and Byzantine art and

Mansa Musa, Montezuma I), Change and Continuity Analysis (effects of the bubonic plague

economic and technological developments in long-distance trading networks in AfroEurasia

Renaissance art. We will participate in discussions of different approaches art

historians have toward the analysis of Italian Renaissance art. We may watch the feature film

“The Mission” to analyze the conflicts among European missionaries, European colonists,

and indigenous peoples in South America and the new cultures that resulted. We will

Leader Analysis (Peter the Great, Suleiman the Great, and Qianlong), and map exercises on

domination of Africa. [CR13] We will use a documentary on Napoleon Bonaparte, to defend

or refute the statement, “Napoleon was a great man.” The unit’s work will also include a

between imperialism and industrialization. These lessons address Themes 1, 4, and 5. [CR4]

• Key Concept 6.1: Science and the Environment

this century, as well as their influence on our contemporary world. We will spend at least half

of the unit examining the independence movements in Africa, Asia, and Oceania after World

Kenyatta, and Mandela). Finally, you will re-examine your start-of-the-year assessment

of the state of the world, this time considering the role of history and whether a deeper

understanding of prior events alter or reinforce your previous conclusions. These lessons